After drooling over Toronto Life's two page spread on the city's best gourmet doughnuts, I had an immediate craving, and an immediate mission. I was going to be in the Yonge and Dundas area for a movie screening, so I settled on George (Queen Street East between Church & Jarvis), whose timbit style doughnuts, filled with warm chocolate, sounded amazing. When we got there, the maitre d seemed extremely bewildered that we only dropped in for 'the doughnuts we saw in Toronto Life.' She also didn't really know what we were talking about and showed us a jelly doughnut option on the dinner dessert menu. After sitting down, a more knowledgeable gentleman asked if we wanted the beignets with chocolate. I nodded furiously and he mentioned the dish is usually just on their lunch menu, but could easily make them. Points for George.
Not long after, four small doughnuts came to the table and we were warned about the chocolate filling, and how it's been known to cause accidents. So we cut into them slowly and watched the oozing begin. They also came with a delicious sweet and sugary jam type dipping sauce. Definitely worth my $8 dollars (a little more with tip). 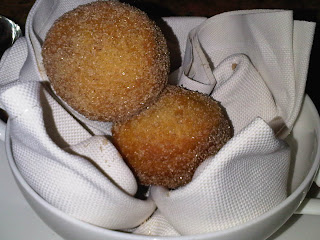 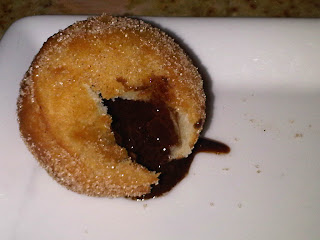