First came the facelifts, then the botox, now the latest craze hitting Hollywood - gourmet food trucks. Rolling around LA (and surronding areas), the trucks tweet their locations to their faithful followers, who flock in droves for the fun food.
Before embarking on my recent trip to LA, I read up on the food scene, and soon discovered this trend. My friend Audra who I was visiting, also mentioned that we should try a few out. Tip - there are a lot of different kinds of trucks, so probably best to focus on a few, that sound the most appealing to you. 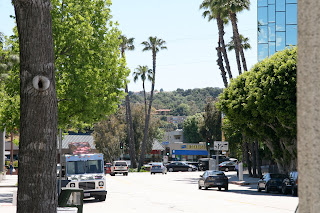 The first truck we tried - Cool Haus - sells spectacular architecturally inspired ice cream sandwiches. The 'cool' workers are actual architects, and other creative types. With homemade flavours like - blood orange, mexican chocolate, cinnamon, coffee toffee, vanilla bean, apple pie, sea salt caramel, red velvet, and even foie gras, and your choice of chocolate, chocolate chip, ginger, oatmeal raisin, snickerdoodle, and brioche cookies to complete the sandwich - there are so many options. And remember don't be shy about testing some of the flavours out. They are more than happy to oblige. 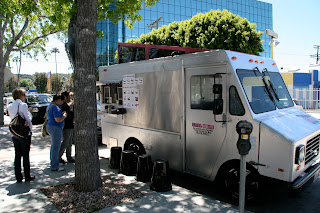 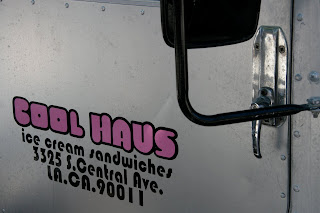 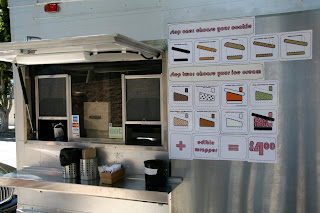 The truck was parked outside the CBS lot in Studio City, and we happened to be near there between 1pm - 2pm, the hour Cool Haus tweeted they'd be there. Score! As we joined the small line, a woman infront of us, who works at CBS, said she requested the truck come by and then spread the word. After she ordered, she started to coach her colleague on how to eat the sandwich without it getting too messy, and I learned pretty fast, this was important. Audra got chocolate chip cookies with dirty mint ice cream (dirty because there are chocolate chips mixed into it), and I got chocolate chip cookies with one of the flavours that sounded the most unique and delicious - brown butter with candied bacon. I can't really describe the taste exactly, but it was rich and the bacon bits (really small), didn't over power the sandwich. As soon as I got it in my hands though, the dripping started (and I thought ordering was the hard part). It's best to lick the ice cream around the cookies first - then you can eat it as a sandwich without all the ice cream squishing out. And the paper they wrap the sandwich in is edible (see below for photo of Audra eating it), although after consuming something so delicious, the paper doesn't really stack up.
http://www.eatcoolhaus.com 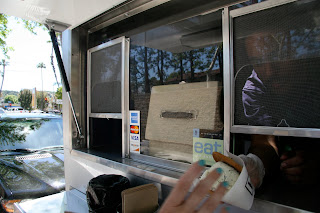 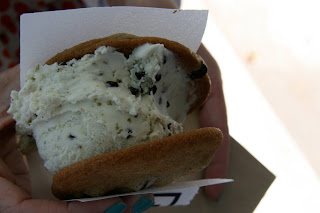 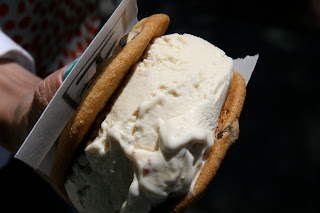 (if you look close enough you can see those bacon bits!) 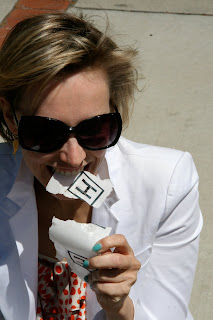 Next on our list was the grilled chese truck. Again, we checked its twitter page in the morning, and happened to be in the area. It was parked infront of a comic book store that was hosting an event - sorta a perfect location if you ask me. The line was long, but it gave ample time to figure out what to get, because, so many options. The menu, posted on the side of the truck, consisted of the plain and simple melts - with American, sharp cheddar, gruyere or brie (on french or wheat bread), the mac and cheese melt, the cheesy mac and rib melt - with mac and cheese, bbq pork and caramelized onions, the harvest melt - roasted butternut squash, gruyere, agave syrup, fresh thyme and balsamic reduction, the brie melt - double cream brie, sliced pears and honey, and the dessert melt - served on sweet brioche with roasted banana spread, marshmallow, and nutella. I know, amazing right!? It gets better though because you can also make your own melts, and customize one the way you want it. 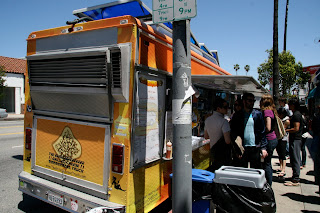 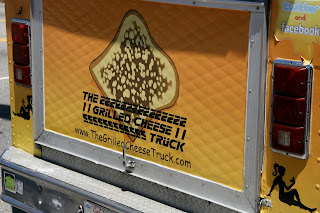 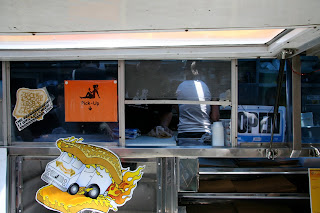 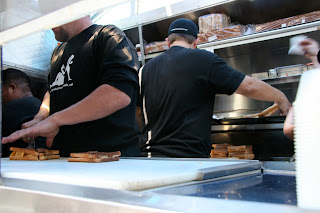 Instead of going with a basic, I went for the big one. The cheesy mac and rib melt (aka fully loaded), and was it ever. I also got a side of garlic aioli dipping sauce that complimented the sandwich so well. And yes it was heavy, but worth it. So worth it. The dessert melts sounded amazing too but couldn't take things that far.
http://www.thegrilledcheesetruck.com/ 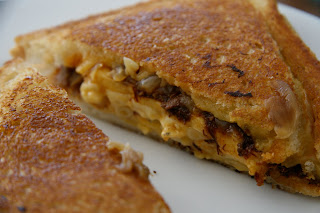 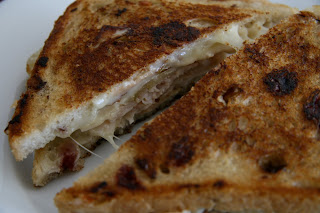 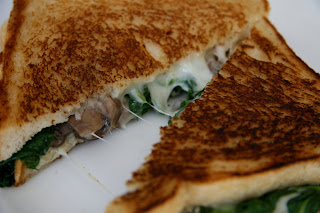 The other truck I really wanted to try was one of the taco trucks - after all, L.A. is known for their ridiculous Mexican food. The original taco truck, Kogi, was on our radar, but after a few hours of hanging in Santa Monica and working up an appetite, we stumbled upon Calbi (an equally delicious taco truck). There was a bit of a line, and it took a bit of time for the food to be made, but that was ok. And keep in mind it's not just tacos on the menu - they have burritos, and quesadillas too. I got the tacos, three of them - chicken, shrimp and beef. They are cheap, and small, and so yummy. I could have eaten three more! Please roll into Toronto soon (at least for the summer).
http://calbi.com/ 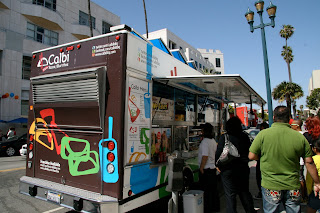 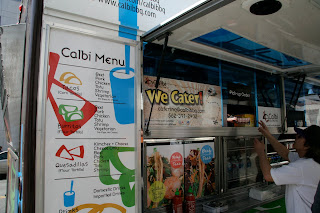 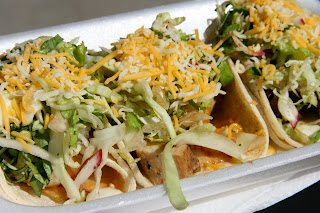