After Rob makes us, plus Caroline a reservation at Claudio Aprile's newest restaurant Origin, he sends me this email - 'Better not bring your camera to Origin on Thursday. Claudio will cut you!' Along with a link to Origin's blog (they don't have a full website yet) that had this
posting -
A short message to all people that have or plan on coming to Origin with huge zoom lenses and flashes that induce seizures, the food critics and wannabe food critics who end up just being lonely bloggers in front of their Mac at 3 a.m.

1. Do your research before you arrive. Have an open mind.
2. Understand the concept and accept the fact that Origin is not Colborne Lane.
3. If you can do a better job than me and my staff then why aren’t you doing it?

I was scared. Then I read another entry posted only 20 minutes after that one -

I am truly flattered by guests at Origin that want to take pictures of my food. I am not against bloggers or critics. I only wish that my work is judged through a focused, clean lens and that the bloggers and critics ask questions, explore deeper before they upload or get published.

I felt a little bit better and decided I wanted Origin up on Food & Co.

After not being able to find our reservation, the very friendly hostess seated us in the lively bar (its own separate space from the dining room complete with DJ) to wait while they got a table ready. We ordered drinks and not long after she was back, and seated us at a great table by a window looking out onto King St. And immediately we noticed the large percentage of attractive bartenders and waitstaff. A game may have been played called 'rate the waitstaff'' but I won't go into details.

The menu was large and divided into multiple sections - snacks and sides, raw bar, mozzarella bar, chilled, hot and sweet. There were so many delicious sounding things. We also had questions and our waiter Charlie was very helpful in answering and was extremely knowledgeable. Good job. He also did very well in selling us one of Origin's nightly specials - a huge lobster for $75. We decided to just go for it. It sounded too good. 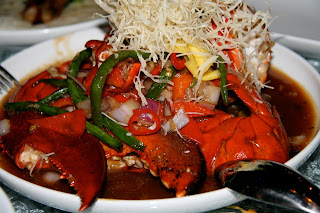 And it was good. Really good. But in the end, we thought we should have ordered a couple more things to share instead of Mr. giant lobster. Rewind to before and we ordered the deviled eggs with bacon, the patatas bravas, raw tuna salad (so delicious with the avocado and asian pear), two mozzarella plates - one with pear and pine nuts and the other with pesto (we liked the pear one better and the bread was soft and easy to cut with the cheese on top), the black cod (melted in your mouth), and the duck wrap. 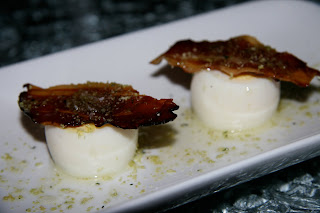 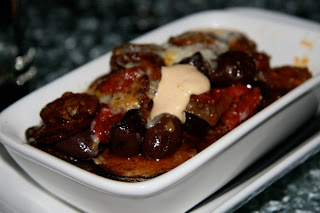 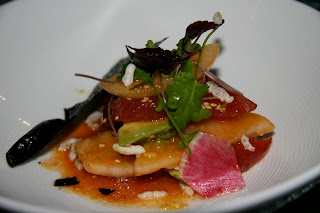 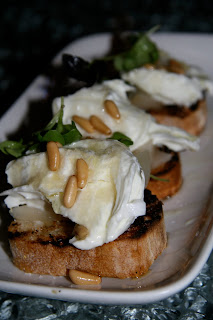 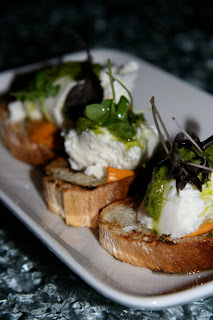 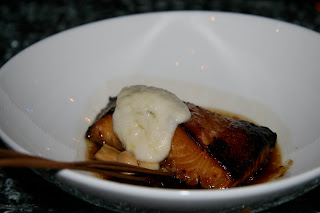 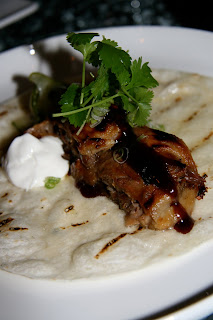 There were so many other dishes we wanted to try and I wanted to take a few more pictures of the restaurant itself, but I didn't want to push it. During our meal the bar next door kept filling up and the DJ was playing great music, blaring into the restaurant, which was fine with us because we were singing along. Dessert time came and again we wanted to try it all, but still thinking about our $$ lobster, we just got two - the caramelized brioche (amazing, must order) and my all time favorite dessert - hot chocolate cake with (here's the best part) SOFT SERVE vanilla ice cream. They have a freakin' soft serve machine. And even though the cake was too small, the ice cream made up for it. 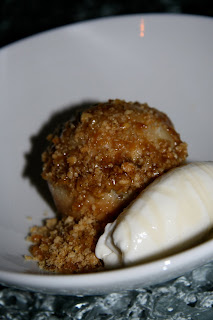 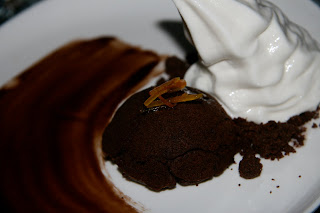 Origin definitely lived up to the hype and hopefully Claudio wont cut me after this post!
**Update - I randomly ended up at Origin again two nights later and tried a few other things. The calamari is a must - fried but not heavy in a delicious peanuty sauce. Also the creme caramel had these amazing little frozen raspberry bits that burst with flavour. The black cod was even better the second time.
Email Post
Labels: Ice Cream King Street East Lobster Toronto Restaurants